The Unitarian Church gives us a pager when we drop (a usually crying) Jack off at the nursery before service. It's a pager exactly like the ones Chili's gives you when there's a wait.

Last night when we were drinking (the delicious organic fair trade) coffee and chatting with a friend of ours in the time between service and dismissal of children's religious ed. classes, our pager lit up. "Our table's ready," we joked to each other as we finished out coffees (in retrospect, not cool) and headed to the nursery. I thought maybe Jack got sad. Ben thought he crapped his pants.

He projectile vomited Barnes and Noble brownie all over the playroom rug. And himself. And the nursery worker (who also works at my gym playroom).

Poor little guy-- the puke really freaked him out. He kept asking "What puke?" even after we explained what it was. He didn't and doesn't have a fever, and there hasn't been anymore puke. I'd blame the brownie, but Harry split it with him.

Harry was beyond annoyed that we picked him up from class early, and when he opened his car door and caught a whiff of Jack, he said , "Oh great. It totally smells like vomit in here."

Jack was sad because we told him he could pick our Saturday night dinner spot, and he chose Chipotle ('potle, in Jackanese). Instead, Ben ran out for sandwiches, and Jack puked before and after eating. it was dreamy. Today, though, he has kept down all his meals (including lunchtime 'potle). He still has no fever. Weird.

Since he was feeling better today, we put him to work. 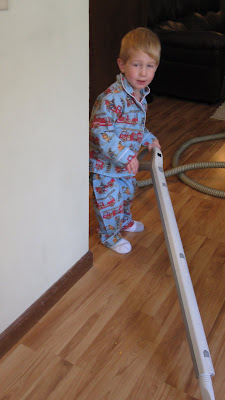 He was so cute playing castle. He was making the knights talk to each other, and the horses whinnied. I should have filmed him instead of taking this faceless picture. 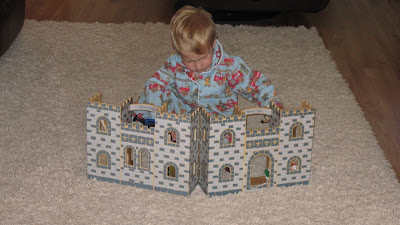 A 4 episode Dora marathon made him feel a little better. 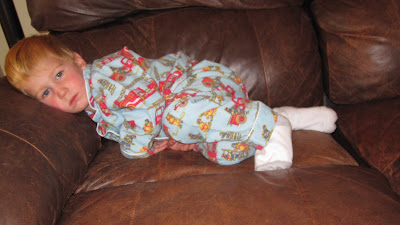 poor little man! that's the worst! I'm glad he's been puke-free today. I hope whatever it is/was, no one else gets it!

And "our table must be ready" is hilarious. What else could you possibly say when that thing buzzes?!

Oh, how sad for lil' Jack. Glad to hear he was better today.

His pajamas are adorable.

At least he didn't have a fever. It's so sad when they're so little and have a stomach bug. Glad he's feeling better!

so glad he;s better, and to think you were worried abou his speech..it's just Harry is morelike you with his comments and stuff....Bomma

Poor little dude. I saw this on facebook, but the pictures are just so sad. I hope he's better.

OMG Harry made me laugh out loud. I hope there was an eye-roll accompanying that statement.

And my Jack called it Potle for the longest time too!