September was hard you guys!

September has kind of sucked you guys.  I kept thinking that I was going to get my shit together and be able to do things like read books and blog and sleep and work on my online class, but, alas.  It never happened.  Here's to getting shit done in October, right?

You know what I have done a lot of?  Baking.  With whole pumpkins.  And tons of chocolate chips

Made a  ton of babyfood.

Figured out how to work in 2-hour increments so I could feed my fat little baby on demand and not have to pump.

But didn't get very much done. 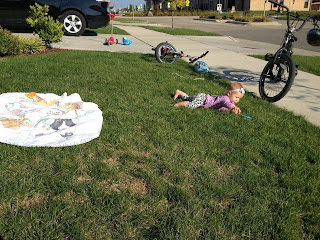 My brother Jon cam to visit from New Jersey, and we had so much fun even though Cooper got horribly sick and had to see the pediatrician twice in 3 days (He hijacked Dorothy's 6-month well-baby visit on Wednesday morning, scored an urgent visit of his own that afternoon and was so sick that the doctor's office called us and asked us to bring him in again on Thursday morning-- neither of them slept for 4 days but things are slowly creeping back to normal although niormal for Dorothy is actually horrible). 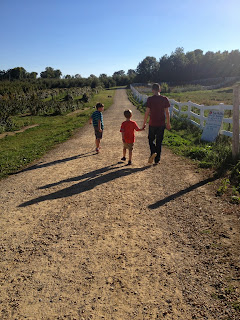 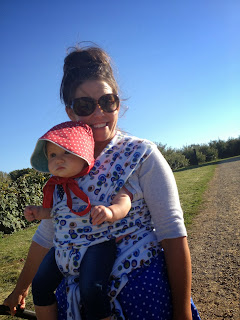 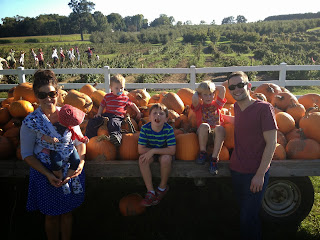 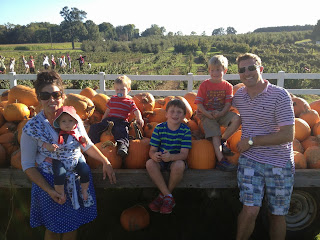 The boys loved seeing their uncle 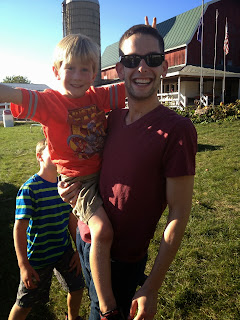 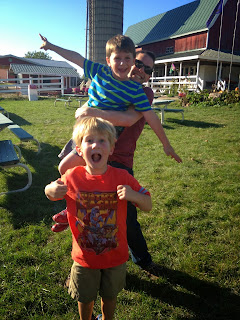 I love this picture 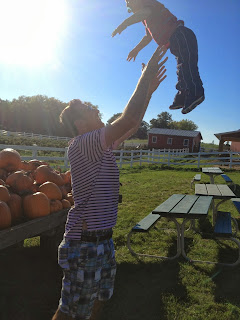 This was so cute but then Dorothy's leg got stuck under there and now she has a little cut on her heel. 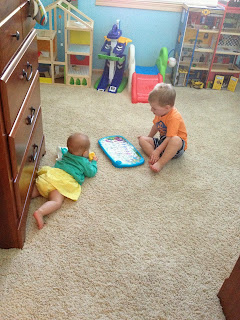 Ben and I hosted a fundraiser for the PTO on Saturday.  I really put my meager bubble letter skillz to the test, and Ben did um EVERYTHING ELSE-- he's really good at running fundraisers it turns out. 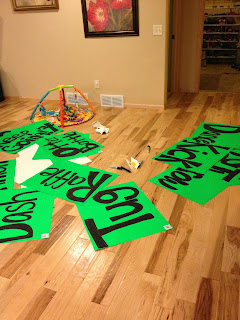 But it was all for the kids, and the kids LOVED IT.  Harry ran 3 miles! 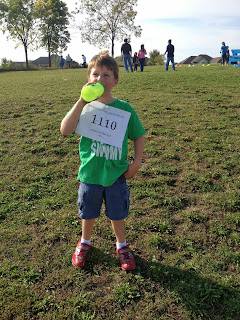 See you tomorrow when I tell you how few books I read in September (it really was kind of a mess of a month).
Posted by Sarah at 9:08 PM 2 comments:

Our friend Jenn made this awesome bonnet-- how great is it?? I love my little Holly Hobby baby 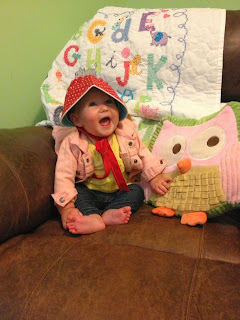 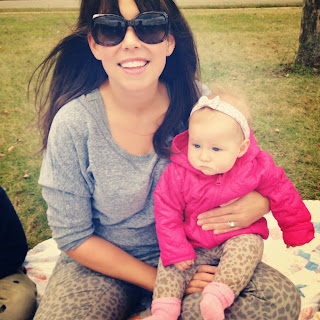 She spent most of Harry's soccer game nursing, and she kicked off her socks even though it was totally freezing.  I love her little crossed ankles. 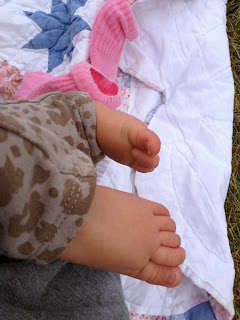 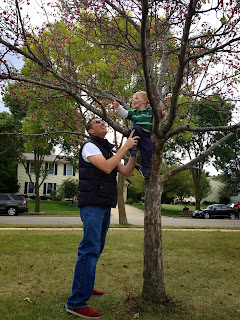 Ben and Harry hit up the third football game of the season and scored an awesome autograph on their way in. 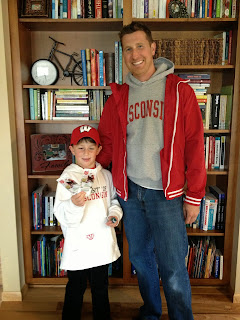 Dorothy is a helluva driver. 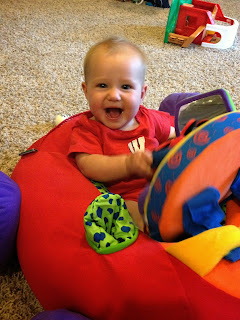 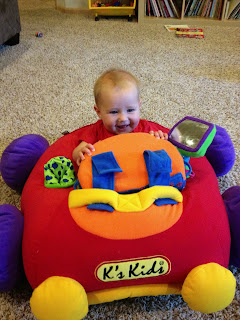 And!  She LOVES squash. 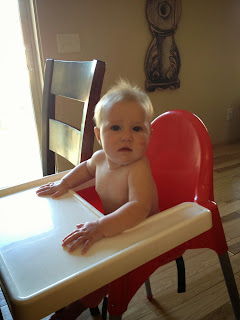 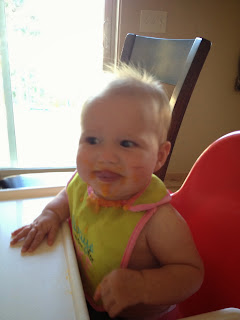 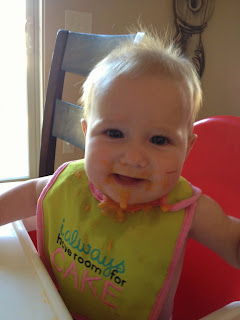 But holy shit you guys.  She is the worst sleeper I have ever given birth to.  She wakes up 5 times a night some nights.  WTAF?  I got the Sleep Lady's book from my library, and with her gentle sleep advice was able to finally help Dorothy organize her naps. (THANK GOD-- and they are not even good naps everyday but I don't care because it is so wonderful to have a little tiny bit of predictability).  But I am not ready to sort out nighttime sleeping because when she wakes up in the middle of the night, I am so freaking tired, all I want to do is feed her real quick and stumble back to bed.  HOLY SHIT it sucks when babies don't sleep.

I know that I either need to resign myself to this or figure out how to phase out night wakings, but right now I just want to complain for a minute because I only sleep in 90-minute chunks, and I kind of need to be sleeping longer than that, you know?

You know what else she is?  ALMOST A DAMN CRAWLER.  I think if she could sit up by herself better she would be full on crawling because she can get to a sitting position from lying down-- a sure prerequisite to crawling-- but she doesn't have enough core strength to stay there.  She is a darn good scooter, though, and occasionally, she gets up on all 4s and crawls a tiny bit before collapsing flat and reverting to slithering.

Fall in the air!

We were so excited by the slight chill on Saturday that we went to the apple orchard to pick Dolly’s first food. And everyone wore their pumpkin hats, natch, but I noticed that the truly dedicated first time parents, who all did a way better job of documenting every adorable second than we did, had their snowflakes in APPLE hats.

Damnit. I think we are rushing the season.

We came home from the orchard and used my Beaba Babycook to turn our bounty into delicious applesauce for our tiniest snowflake-- straight from the tree to her little tummy.
We also made a fantastic apple crisp because I chickened out on the pie at the last second because I am terrible at making pie crust-- something I want to rectify but don't really have time to deal with.  And Hary had a soccer game, where he scored 2 goals and never once asked to sit out.  Who is this kid?


As usual Blogger uploaded my pictures in a completely screwy order.  This is Dorothy's first encounter with food:

On September 15, she turned 6 months old!


You guys! I had the most exhausting day today!

When Ben woke me up on his way out the door at 6:30, she was still asleep.

I was starting breakfast for the boys (and by starting breakfast, I mean tossing the pumpkin chocolate chip muffins that we made from whole pumpkin-- seriously, don't buy pumpkin puree-- make your own-- it tastes SO MUCH BETTER -- on their plates with a yogurt and a glass of milk) when Ben came back in to say our friends had just called him.  They were on the way to the hospital to have baby #3 and were dropping their 2 older kids (in Harry and Jack's grades) at our house.

The morning was a bit chaotic-- in a good way, and I managed to wipe down all 3 bathrooms, do 3 loads of laundry, and vacuum 3 of the bedrooms while a 5-kid tornado whipped through the basement and Dolly bounced in her exersaucer.  I did not manage to shower or put on any make up, and my hair was in a ridiculous top knot.  This was unfortunate because I had to volunteer at school from 9-11.  Luckily our sainted babysitter cleaned up the kid mess while my traitorous baby took a 2 and a half hour morning nap.

After the sitter left, I fed Cooper, nursed Dolly, cleaned up lunch, put the three loads of laundry away, and put Cooper down for his noon nape (yes-- all that other shit happened before noon).  Then I burned 300 quick calories on the elliptical while the baby happily played with toys and took a shower while she pretty much scooted around my bedroom screaming at me.  By 1:00 she was napping, and by 2:00, she was up again, which was good because I was able to nurse her before I went to work.

I spent a quick afternoon on campus, came home to feed the baby again and help Ben get dinner on the table.  I cleaned up the kitchen and supervised waffle making.  Then Ben headed to campus to meet with his speech team, and I put all 4 kids to bed.  When he gets home, we are going to sort out raffle prizes for the giant PTO fundraiser we are running next weekend.

And this is why I have not blogged.  Things are hectic over here.  I am 2 months behind on Dorothy's baby book-- THAT NEVER HAPPENS TO ME.  I have only read 2 books this month.  September is killing me, and in October?  We have hockey 4 days a week.

I am just hoping to make it through these next few weeks with my sanity in tact.  I have to observe 30 TAs in their classrooms, and I can only be on campus for 2 hours at a time because of somebody's eating needs, which means LOTS of trips back and forth and no time to work on my other work.

The good news is I have had time to check out Pinterest for healthy Halloween snacks, and we're all set on over achiever classroom treats for 5 weeks from now.  Priorities, right?
Posted by Sarah at 8:58 PM 2 comments: