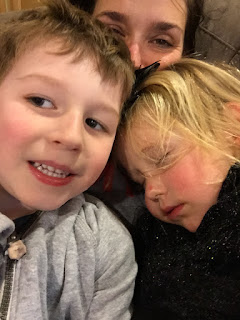 I never should have let Dorothy take the above nap because she didn't go to bed until 9:00.  I mean, she's IN her bed and has been supposedly since 7:30, but she has been awake.  Like, standing on Cooper's top bunk and getting ready to jump awake.  The thing is, Dorothy is a HANDFUL, and when she falls asleep, it's sooooooo tempting to let her rest for a little while. 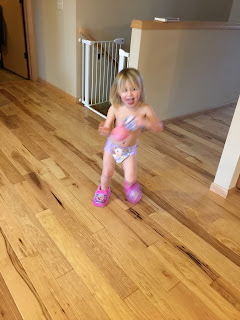 Ben took Cooper to the doctor yesterday because poor Cooper could not sleep Monday night and sure enough double ear infection.  The doctor (not our usual guy) asked if Cooper went to school, I think meaning daycare.  But Cooper said he had preschool the next day (today) and the doc encouraged him to stay home.  Which, dude.  It's only 2.5 hours!  We're not talking daycare here.  Still, Cooper took his advice to heart and took a sick day.  We dropped Dorothy off, and her teacher noticed how happy he was to be home sick with me.

We went to the grocery store first, the one by the fire station and sure enough, a huge ladder truck of firefighters was there shopping, and they gave Coop a hat. 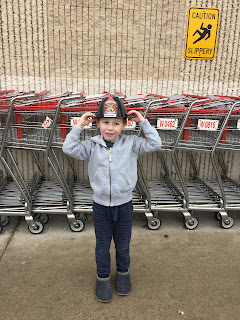 He was super helpful. 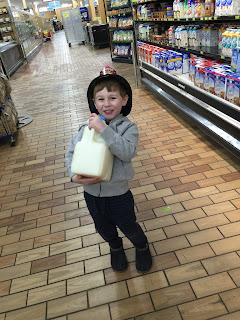 He looooved our trip to the library because he could do whatever he wanted, and none of us had to traipse around after Dorothy.

We came home with 45 minutes to spare, and I put away groceries, dusted and vacuumed the living room and 4 bedrooms, did some laundry, and wiped down all the bathrooms before we went to get our little spitfire.

Before all that, though, we had to run by the boys' school on our way to preschool to drop Dorothy.

So I told you last time about the ball thing, right?  Well, it worked out great-- the principal called me finally when she was done with various meetings and appointments and told me of course he could play basketball and it was not cool, etc etc-- everything I wanted to hear.  She said that the staff member should have told him that if he dropped his ball in the street it might get run over and then let him manage the ball himself-- exactly right in my opinion, and she agreed that the point should not have been following directions especially after 8 hours of  keeping his shit together in school. I told her that the staff member in question is terrible and has yelled at Cooper before for running in circles during pick up and that I have, in turn, yelled at her for that.  And I shared my concern that if nasty staffers are the ones implementing even the most ambitious behavior policies like the one our district kicked off last year, there is going to be a lot lost in translation.  It was a great conversation.

So today, we went upstairs to give Harry something he forgot at home, and then we came downstairs, and Dorothy ran across the totally empty cafeteria toward the door.  That same staff member rounded the corner and barked, "Hey friend!  Walking feet!"  To my 2-year-old who was maybe 5 feet in front of me, her mother.

I was really proud of myself for not cussing, but I did say, "Have you lost your darn mind lady?"

I said, "Mind your own business," and she said kids were her business.  I pointed out that little kids in the building with their parents were only their parents' business.  And then I got a little close to her and maybe pointed a little and said, "Leave.  My.  Children.  Alone."

And she said, "Noted," and rolled her eyes.

I think maybe she wanted me to freak out, and I clearly did not disappoint.  Something about me?  I am NEVER the bigger person.

The totally ironic thing is that our district is spending a bajillion dollars on consultants to research their community and family engagement problem and there's a low-level district employee, the kind of person who spends the MOST time with kids and their families doing her damndest to make the school as UNWELCOMING as possible,  Who the fuck yells at little kids in schools?  How the fuck are people supposed to feel good about volunteering at school if their little kids aren't welcome?  Who the hell has time to volunteer in elementary schools?  People who ARE HOME WITH THEIR SMALL CHILDREN.  I mean, seriously.

And Dorothy wasn't being rowdy or yelling or disrupting anyone-- she was just running.  In an EMPTY room.

Ugh.  Now I'm all mad again just thinking about it.

YOU ARE AMAZING. I tend to back down from authority, even when I know they are wrong, but I hope if I am ever in the same situation I can handle it as well as you did! I don't think you lost it at all! I would have been crying. There would have been snot. That's losing it. Bravo!

That chick needs another job. NOW. But I'm so glad to hear the principal has actually met and worked with normal children.