Ben and I got to go to school today and watch Harry compete with his team in Book Bowl, which is a city-wide thing.  In teams of 4, 4th and 5th graders read 13 books and then answer trivia questions about them.  The first place team from each school moves on the the city-wide competition.  Harry's team got 3rd, and we were so proud of Harry, who knew the answers to every question about the books he read, including the one he stayed up reading until 10 last night because he has apparently inherited his father's need to work up to the deadline.  My dorky little self would have read all 13 books.  3 weeks ago.  Book Bowl was ADORABLE, and Harry was super intense.  As Ben said on Facebook:  "All of the other kids were clearly participating in a book bowl. To Harry, his team scored a goal with every correct answer and celebrated like they were a hockey team."  Harry also jumped up and down doing jumping jacks while they tabulated the scores, which killed us because he is on ADHD meds-- what would be have been doing WITHOUT them?  At one point, he made a gesture like he was going to rip shit shirt in two Hulk-style.  SO.  INTENSE.

I thought my nap with baby days were over. 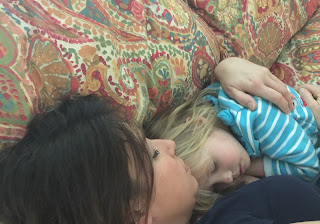 My GNO group did an awesome craft party at a place called Board and Brush-- it's a chain, so if you have one in your area, you should grab a dozen friends and GO.  We all made adorable rustic wood sign and drank way too much wine.  It was so fun-- you start with a pile of boards, and they give you all the stuff you need to distress, stain, paint, and drill them.  Loved it.  That was Tuesday.  Then last night, we had our monthly wine club meting at a cute little boutique that was open after-hours just for us. 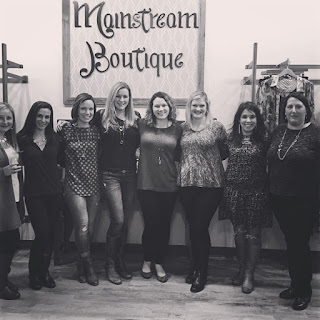 Don;t let me happy smile fool you-- I tried on just about everything in the store and looked good in NONE of it.  I bought earrings (which I am actually super happy with) but felt really fat and shitty afterwards.

So.  I have stopped lying to My Fitness Pal, and I am really hungry and still making bad choices, but fewer of them.  We hit the beach in a month and I'd like to at least be at the old weight I was unhappy with last year.

And tonight, it's the husbands' turn to go out, which only seems fair, before we go out as couples on Friday-- phew!  So after special person night with Dorothy at preschool, I am going to spend the night ensconced on the couch working on my memoir, which is coming along well, you guys-- I'm so excited!
Posted by Sarah at 2:31 PM

Not to invalidate your wine night experience, but I saw that picture and my first thought was how cute and little you looked! I'm sure the earrings are adorable too. I love your sign! So much cooler than the wine paintings that almost all 30-something moms have hanging somewhere (myself included).

Look up this book, makes so much sense and I have lost pounds and gained energy. Good luck.
Wheat Belly: Lose the Wheat, Lose the Weight, and Find Your Path Back to Health

Look up this book, makes so much sense and I have lost pounds and gained energy. Good luck.
Wheat Belly: Lose the Wheat, Lose the Weight, and Find Your Path Back to Health