I should be putting laundry away, but for some reason it didn't get all the way dry, so my towels and pajamas are being tossed around in the dryer again. The big boys are sick with strep (but can go back to school tomorrow! or at least the biggest one can-- the bigger boy doesn't have school on Fridays) and are geeking out to Star Wars movie 3 of 3-- it has been a long day, and they have marathoned their way through the first 3 episodes. The baby is sleeping and has been all afternoon, which is good because he did not sleep all morning. But oh did he keep trying! Finally at Old Navy he slept like an angel in the Moby while I bought $300 worth of crap that looked horrible on me. Ben returned all of it on his way to class today except for a pair of tights, a button down, and a cardigan, which would be a cute outfit, but I feel like something would be missing. Oh yeah. Pants. Because I am too wide for any pants in any size I am going to buy. Also not a good look for me right now? Tunics and leggings. Also Old Navy has these awkward skirts -- sweater skirts-- that are cute on the hanger but dreadful on me. So stretchy cotton skirts and yoga pants and baggy t-shirts it is. But I need to go to a meeting on Monday, and I would very much like to NOT wear my jammy-clothes. (Although I am seconds away from ordering Pajama Jeans.) So maybe Cooper and I will troll the mall later tonight. It has to be less germy than my strepped out house. I would love to be outside right now. It's 75 and sunny and perfect and should be just like this until next Wednesday when it is supposed to rain, at which time it will turn gray and bleak and cold. Until April. But the baby is sleeping, and I can't move the sickies from the couch. I may have to wake the baby, though, because he needs to eat soon for both our sakes. Speaking of, a lovely neighbor just brought us a fantastic dinner. The dinners we have gotten from neighbors definitely put my nightly cooking to shame. As soon as the baby is a predictable sleeper, I swear I am going to be a better cook. Also, I will exercise, clean out my dresser drawers, and paint my nails. Someday.

Not his best angle. 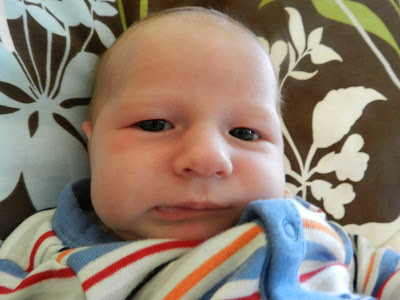 Jack's school has a kid-sized nest in the yard. It was their community art project this term. 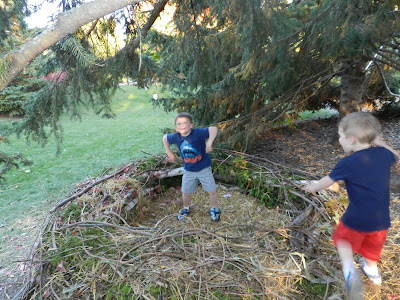 Jack is dancing like a chicken, or so he claims. 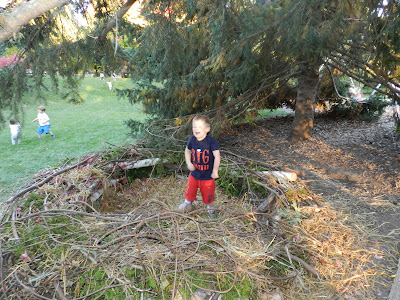 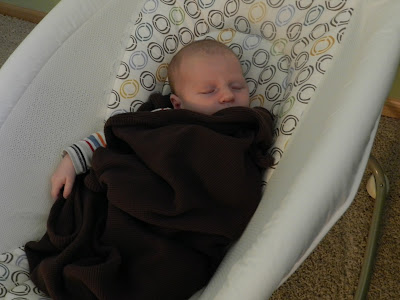 OMG we spent a very long time in sick-kid purgatory. Yay school tomorrow! I hate the post-partum fashion blahs so much! It doesn't last forever, though.

Oh man I hope you order the pajama jeans. I am secretly coveting a pair of those myself.