Brussels Sprouts Your Kids Will Eat for Breakfast

Harry said the sweetest thing to me this morning.  He said ARE THERE ANY BRUSSELS SPROUTS LEFT? I WANT TO EAT THEM FOR BREAKFAST.

DUDE.  I never thought I would see the day.

Here's my super secret recipe:
2lbs shredded sprouts (I just threw them in the processor after washing them-- I didn't even cut the ends-- and I pulsed, so most were shredded but some big pieces remained)
1/2 a stick of butter
some maple syrup (the real stuff, not Log Cabin)
4 pieces of cut bacon, chopped up with kitchen scissors
a bunch of Trader Joe's Everything But the Bagel seasoning

Grease a 9x13 glass casserole dish and throw in the sprouts.  Toss with maple syrup.  Chop up your butter and throw it on top with the bacon.  Sprinkle liberally with seasoning.  Roast at 375 until they look done.  40 mins, maybe? 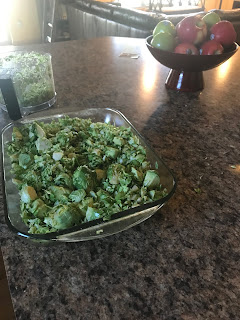