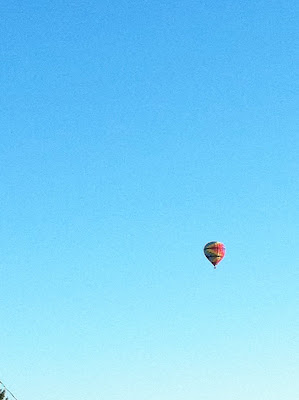 We left church last night to see this hot air balloon above the building, and Harry screamed, "Mama! Take a PICTURE!" Obviously, I listened.

We've been in the process of joining this particular church since the Easter before Harry was born when we attended a fascinating, cerebral Easter sermon. We signed up to be on the mailing list and have been getting the newsletter and emails and directory updates ever since. In 2006, though, the church launched a huge remodeling project, planning to double its current size. The construction efforts were complicated by the fact that Frank Lloyd Wright built the original building, a historical landmark, so the addition had to keep his design integrity.

We didn't attend servies during the remodeling project, but we did send Harry to nursery school there last year, and we talked about going. A lot. We just didn't know what to do with the kids-- did they go to Sunday school, to the nursery?

A few weeks ago, I got an email from one of Harry's nursery school friend's mom (Jewish with a Christian husband), who said they were taking the plunge and signing their son up for religious ed. classes on Saturday evenings and that they planned to take their toddlers (who are Jack's age) to the nursery and attend services themselves. Ben and I decided this was the perfect time to join. So we did.

We went last night, and we loved it-- me maybe a little more than Ben, who liked it but didn't feel as spiritual about the whole thing as I did. Jack played happily in the nursery with Pooh Bear. Harry liked his class and was joyfully reunited with his favorite playground.

It's a Unitarian Universalist congregation, so not Christian (but there is a Christian study group Ben could join) and not Jewish (though a reform congregation of about 200 does also worship in the space), but perfect for our blended family. Last night's service was about the spirituality of poetry and the ritual of language that exists beyond memory. It was amazing. All of the readings were from famous poetry and famous literary criticism of poetry-- lots of transcendentalists and scholars-- what's not to love?

Harry got to stay for the first 20 minutes of the service with all the other kids, and he loved the harpist and the hymns (which he sang loudly-- he said he was learning the words from the lady behind us). He even joined all the other kids at the pulpit's steps to listen to the minister tell a story about the power and connection of shared nursery rhymes and explain that a church was another family to take care of you.

It's very much about mindfulness and finding purpose and carving space for meditation, however you define it-- and those are the very things I worked on in therapy earlier this year. I loved it, and we all felt peaceful afterwards. We're excited, too, that Harry and Jack will believe in something bigger than Santa and the Easer Bunny, their current gods of consumption. 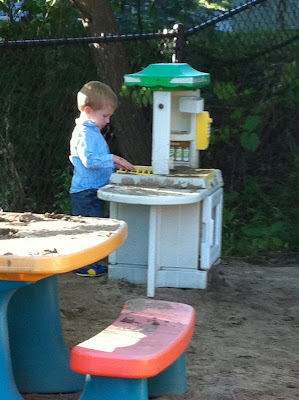 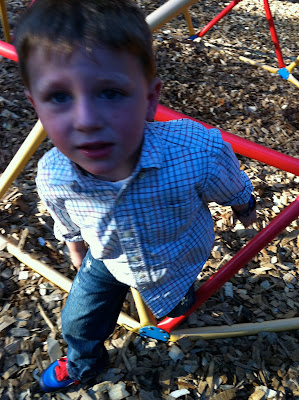 That sounds perfect for you guys! I don't know what I'd do without our church. It IS our second family. I never got that until we had kids and saw how much other people loved them at our church. It's so wonderful.

And my kids also like the playground and the Goldfish the best.

This sounds like agreat experience for the family, everyone needs some roots and this seems perfect for a blended group...I'm proud of you...Bomma

It's funny because Evan and I were just discussing this. Your church sounds great!

We're signing the girls up for a Pioneer's Club at a church around here. Elisabeth went to church a lot when she was really little and we still lived in Pekin and even in DeKalb for a while, but Julia's never really been exposed.

I don't want her thinking we're just talking to ourselves when we say the dinner prayer. :)

That sounds like a fantastic church! My mother in law always poo poos Unitarian Universalist churches because they're not Christian... but honestly? What's not to love about someplace where all denominations are loved and can celebrate spirituality together? We still dont' have a home church.. we'll probably end up at a Unitarian Universalist. I've loved the few services I've attended at the one by us.

that's wonderful! So glad you found a place that speaks to you and makes you feel at home!

Too awesome--I just signed the membership book at my UU Church this weekend! Congrats to y'all. It's such a good journey.

this sounds fantastic! would love to hear this exact sermon. if only it wasn't called church. Boo