On Saturday, my mom and I went to the American Girl Benefit Sale, and it was awesome.

I have loved American Girl dolls since I was 12 and the first catalog came to my parents' house, and I was way, way, way too old to buy them for myself.  I always hoped I'd have a little girl to buy them for, AND NOW I DO.  And what do I like more than American Girl Dolls?  A giant sale!  Combine the two, and you have found my shopping nirvana. 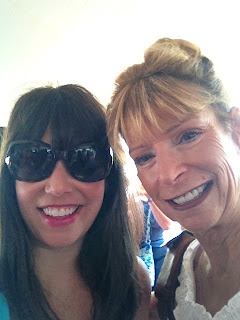 Between the 2 of us, we bought 7 dolls and 3 books, and we only had to stand in line for like a half an hour and that was only because we got there early.  Actually, we arrived at the warehouse at precisely the right moment because just as we were getting in line for our 8:15 entry time (at about 7:35), a woman handed me 2 tickets for 8:00 that she had leftover.  I thanked her profusely and gave my 4 tickets (I also had 2 extra) to a group of ladies with a 9:15 slot-- they were thrilled, and I hope they passed their tickets on down.

In line, we talked to a hilarious pair from Marshfield who drove down at 3 am after scoring their tickets on Craigslist at the last second when some unfortunate doll-less soul was denied vacation time also at the last second.  Sara and Marla showed us lots of pictures of their kids and explained that they were former roommates turned lifelong besties who had their first kids (boys) within 6 months of each other and their second kids (girls, natch) within a month of each other.  Marla said she called Sara from a bathroom in Arizona where she was peeing on a stick on vacation, and Sara vowed to be pregnant within the month, and she was.  They shared a lot with us, including the fact that Marla ruined their symmetry by having a third kid (boy); Sara, a Marla-professed "career woman" considers the doctor she works for to be her third kid, and Marla is a SAHM who watches all their kids.  I LOVED THEM.

I was a little nervous when the clock struck 8:20, and the 8:00 line had still not gone into the warehouse-- apparently the 7:00, 7:15, 7:30, and 7:45 groups were taking their sweet time and were a fire hazard.  Dorothy was at home with Ben and my dad (and her brothers, of course) because no children under 3 were allowed in the sale, and I was worried that she'd be screaming for food while I was buying her dolls that she won't care about for YEARS.

At 8:25 we finally got to go inside, and we were women with a mission.  We scoured the list of available doll clothes because my niece wanted a specific outfit that was not there.  We checked for movies because she also wanted those, but they only had books.  So, we set our sights on dolls and had to strategize because of the per-person limits.  Immediately inside, I grabbed last year's girl of the year McKenna, and we were thrilled to find all of the historical dolls we wanted at the next table.  My mom sifted through the available Rebeccas to find one with well-kept hair and bright eyes.  I was torn between Kit, who matches Dorothy's room the best (shut UP) and Caroline, who is lovely.  Only one historical doll per person, though, so I got Kit whose short bob looked easier to maintain. (No Molly who is retiring this year-- she would have been my first choice.  Also, no already-retired Felicitys who were available in limited quantities, but must have been snatched up by the first wave of shoppers.  Maybe I can get a Molly that way next year...)

Next, we headed to the Bitty Babies.  Finding one for Dorothy was a cinch because she looks a lot like the red haired blue-eyed Bitty.  (I do regret not grabbing all the $5 Bitty Baby clothes, but I think I'll live).  Only one Bitty Baby or Bitty Twin per person, and while it seemed kind of terrible to break up the family, my mom got the blond boy Bitty Twin for Cooper's birthday-- he is going to love pushing that doll around in a stroller!

Finally, we confronted the massive line of My American Girl dolls-- limit of 6 per person, but we each got 1.  I got a cute little brown haired blue eyed girl, and my mom got a brown-eyed girl with wild curly hair.  As I was standing in the checkout line, I wanted to jump the rope and get 5 more My AG dolls because I was suddenly overcome with shopping psychosis, but I didn't.  THERE'S ALWAYS NEXT YEAR.

I think we are going to give her the Bitty Baby for Hanukkah, and Santa will bring her Saige, the 2013 Girl of the Year (that's a lovely tradition Santa is planning to start) who was sadly not at the sale.  My mom is planing to give her Rebecca and Curly, too.  But I think I will stash the rest in the basement (And next year's haul and the next, and you get the idea, I am the crazy hoarding cat lady only no cats!  Just dolls!  Dolls!  Dolls!) and in a few years when she is into AG dolls, she is going to have 8 freaking awesome nights of Hanukkah!

We were in and out in about 15 minutes and home before Dorothy freaked out or Ben and Jack had to leave for tee ball, and we were high on our shopping success-- I love shopping victories.  My mom joked that we should have strapped the doll boxes to the car like hunters-- that's totally how we felt returning home.

The 3rd Saturday in July-- mark your calendars-- who's coming with us next year?
Posted by Sarah at 7:10 PM

I had no idea there was an AG warehouse sale!!! This may be worth traveling for next year. I loved American Girls so, so much but alas, never had one. Samantha was my absolute favorite. I bought my mom Molly with my first credit card. I think I got the catalogue until after I got married.

I need to look in to this! I just dragged my old Samantha doll (so sad she was discontinued, she was the BEST) home from my parents' house for the kids to play with. I washed all her small Victorian clothes - the ribbons, the lace, the wool cloak and fur muff! It's ridiculously adorable, and I can't wait to buy Lucy her own. I'm off to hunt down the old Samantha books! Sounds like a fabulous outing!

Emmie got an AG last year when grandma promised her a trip to AG if she stopped sucking her fingers for a month. So they go down there all dressed up for lunch and picked out a doll. Grandma shows her the dolls that look like her (straight blonde hair) but Emmie sees Caroline and decides that's the one she wants. They get home and she tells me the reason she picked Caroline is because she was wearing a pink dress. EMMIE, WE COULD HAVE BOUGHT A PINK DRESS FOR ANY OTHER DOLL! And of course, the second she tried to play with Caroline's hair, she ruined it. We're talking tangled rat's nest. Fast forward a few months and grandma watches a bunch of YouTube how-tos on straightening AG doll hair. And she does it successfully. So Caroline now has straight hair that Emmie can comb to her heart's content and everyone is happy.

OMG I so want to go. My Caroline needs the Caroline doll!

my mom showed up this weekend with two AG dolls she got at garage sales - one I think is Molly by her face and sort of buckteeth, but I'm not sure because she isn't in the regular outfit, and one Kirsten which is practically perfect except for sort of mussed bangs. I really considered sending them to you because I knew you'd love it, but then I decided I'd rather have the $ and listed them on eBay. (Kirsten is already going for $75 so I think I made the right choice)